Our blog provides you with up-to-date reports on our salons throughout Europe, including thoughts, statements and pictures. Step-by-step we will publish posts with further background information on the stories and topics.

You have the change to be part of our blog as well: Send us your reports on your own individual salons with additional pictures and we can publish it here.

Salon deRadika in Northern Ireland took place inside a prison at the outskirts of Belfast, a city with 48 walls. These walls are cynically called "peace walls" because they are supposed to separate former radical enemies: Catholics and Protestants, Unionists and Irish Nationalists. Around 3,500 people died during the conflict. Almost every family lost someone. Thus, our guests in Belfast have been affected by the topic of radicalism in a very special way. Although most of them were environmental activists, this ground shaking conflict of the 1990s nevertheless left its mark on almost every individual biography.

The meal was prepared by inmates. Because the prison management has a progressive concept of resocialization, the women who live in the prison are called “students.” The students/inmates are given the opportunity to participate in different classes and have their own keys to their cells. The inmate/students also participated in the evening but they had to leave early because of lockdown time. Paula McIntyre, a famous cook in the country and leader of the Slow Food movement in Northern Ireland, organized the evening and showed the inmate students how to prepare the meals with her recipes.

Collections of quotes from the discussion:

»Being radical means to be very honest and true about personal aims and convictions, including the wish to reach a better future. Radical opinions and the willingness to change the present circumstances is something progressive.«

»When people feel lost in society and excluded the potential for a radicalization is quite high. Fear (of strangers, of an uncertain personal future, of changes in general) is a main motor for radicalism. It comes from deep inside yourself, in some cases you just need a trigger for it to break out.«

»Search for identity can trigger your radicalism. When you look for something, to belong to a radical group, a nation, something bigger than yourself as a tiny individual, can be a kind of savior. Being radical or belonging to a radical movement makes you feel important and gives you a sense in life.«
— See Jeremy Maradas-Nado: You must be a hero in life —

»Justice is another big word in this context. All four protagonists are fighting for their personal version of justice. But, of course, it is completely different from person to person - depending on personal experiences, family history, and political circumstances.«

»Traveling helps not become an excluding radical. Then you see so many different possibilities of how to lead your life.«
»This is a very privileged point of view. Who has the possibility of traveling the word? And even if: Some people travel a lot but they only see what they want to see and they meet only the people they have in their personal focus. Melanie Dittmer for example travelled a lot, but she still has the point of view, that everyone should live and stay in his home country.«
»But it is dangerous to live only in your own bubble. One bad example is the Brexit, where people just didn’t think further than their quite narrow horizon and read only the news with the ‘facts’ which fit in their Europe-skeptical image of British society.«

»I become radical when people throw litter away in nature. Then I always go up to people and remind them that this is a crime to environment and nature.«

»Me, as a woman wearing a headscarf, I would become radical when Muslim women in in my surroundings are attacked because they wear a headscarf.«

»What role does violence play within radicalism? Is it possible to really change something without using violence?«
— Sighs and bitter sobs —
»We have had enough of that. It’s much more important to create stable relationships between former combatants. And now: to strengthen the believe in democracy and Europe after the Brexit vote.«

»For me as an artist, it is more important to ask questions, not to give answers. But that way my work is political too, because asking questions is important to change things. It’s the first step.«

»In Europe, we don’t need radicalism or violence anymore. What we really need now is: compassion.«

During the really very delicious meal, a lady told a story at one of the smaller tables. Indications are changed:

»My cousin visited a friend's house. It was a Catholic house. We are Protestants. But my cousin had a Catholic friend anyway. It is still unusual. He looked at the family photos on the wall and had to stop at one of them. I somehow know this lady, he said. It turned out that it was a photo of his aunt who had died 20 years ago. But she hadn't died. She had just married a Catholic and moved five miles down the road. She died of cancer later.« 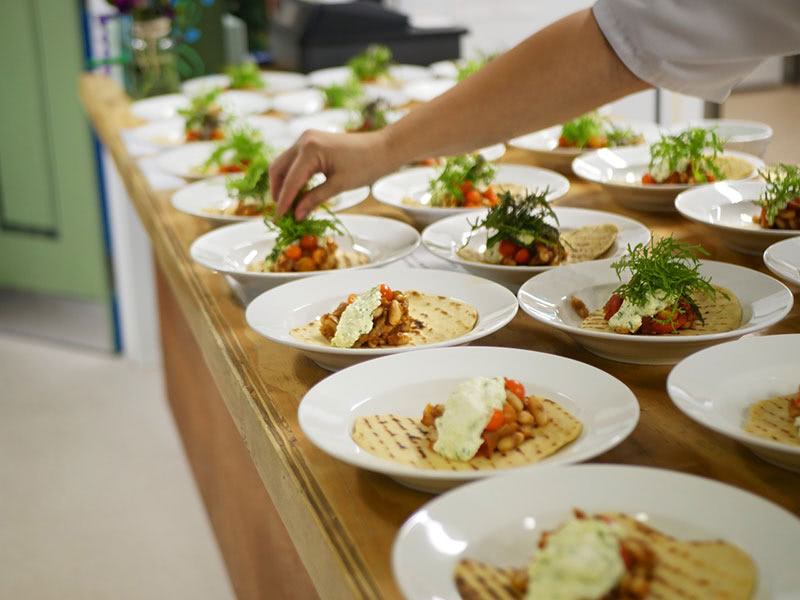 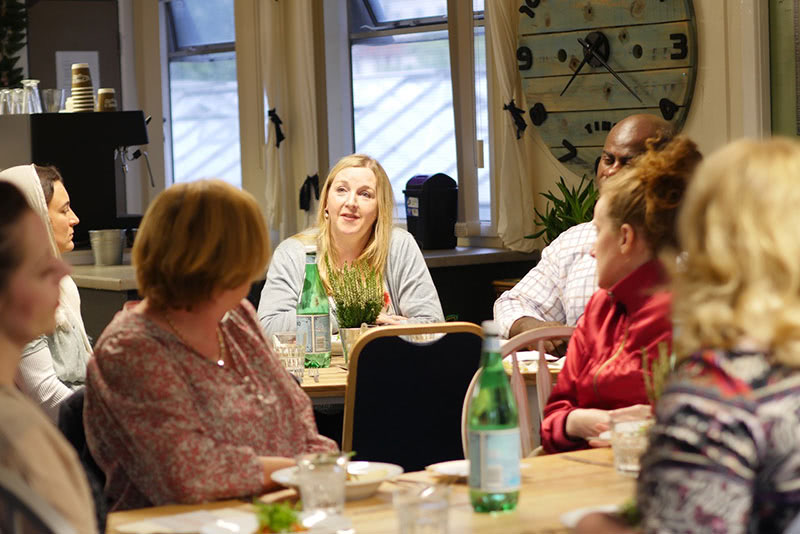 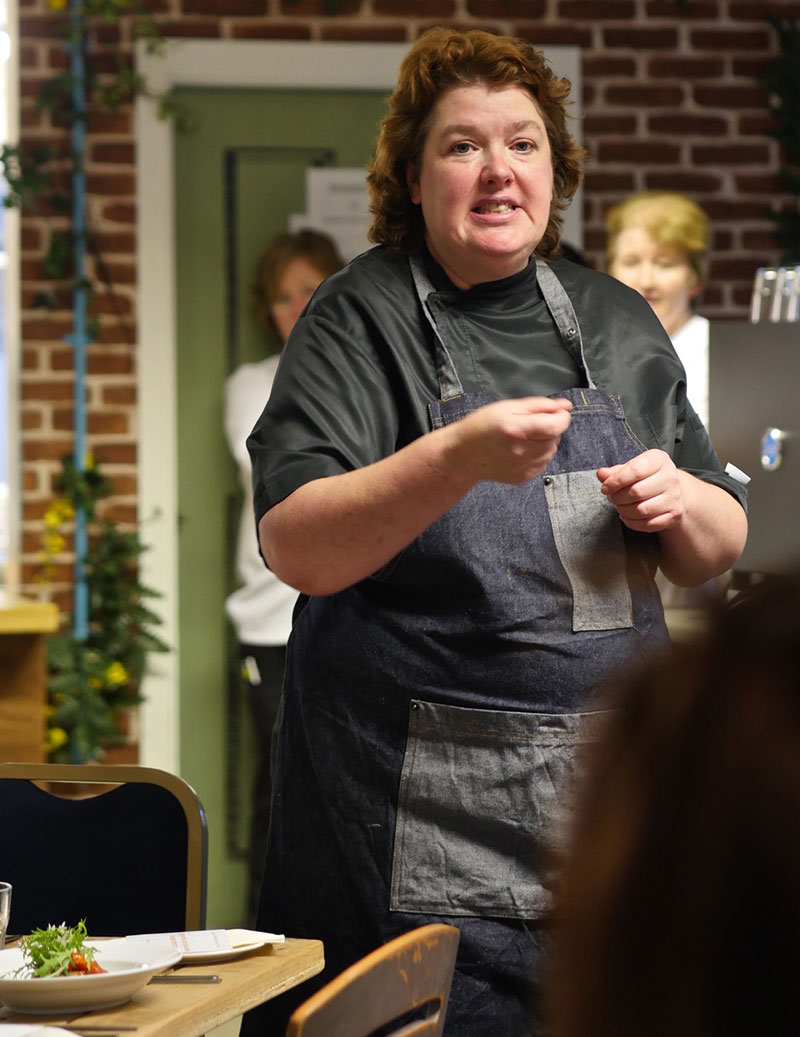 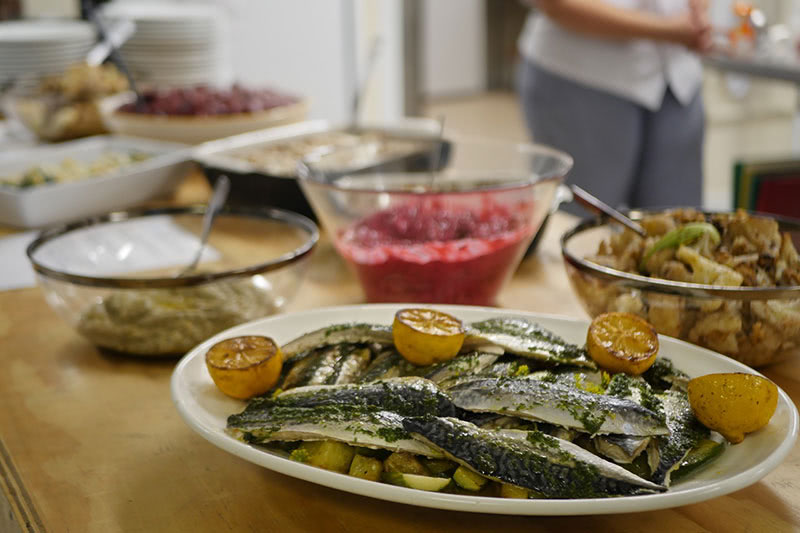 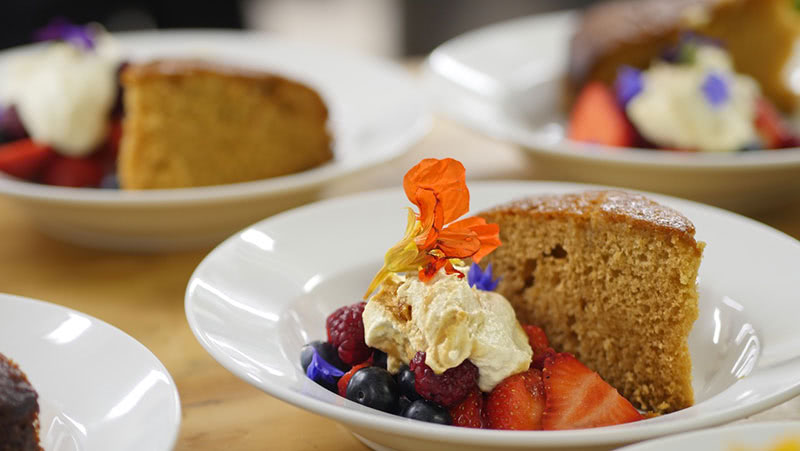 Turning the Neo-Nazi Agenda on its Head

Education researcher, member of the initiative EXIT-Germany and participant of our first Salon deRadika in Berlin-Kreuzberg Fabian Wichmann wrote a worth reading article on fighting right-wing extremism for Huffington Post last week as this issue was brought up in the United States after those recent violent events happening in Charlottesville, Virginia.

»How to battle white suprematists, neo-Nazis and racists without sinking to their level?«

After ten years of commitment to re-educating former neo-Nazis in Germany Fabian depicts an effective strategy (4 ways to counter) based on his own experiences. Contrary to the way mainstream society expects you to face right-wing extremists he advices to bring the confrontation to a personal level. And, although not respecting the values of the right-wing organizations, to show empathy instead of dismissing them entirely as a result.

As an alternative to physical confrontation or blind counterprotesting one of Fabian’s methods of resistance in the long term is to turn the right extremist’s hate against themselves and to counteract their exclusive narrative satirically and peacefully.

»Irony, absurdity and humor are often the best resources to change the narrative of neo-Nazism for the better.«

Find out more about effective forms of subversion by reading Fabian’s article in Huffington Post and maybe even start helping to construct a whole new narrative.

Fabian Wichmann works for EXIT Germany, an initiative which focuses on giving right-wing extremists an outlet and support system to escape neo-Nazi culture

It was a very warm welcome in Sofia on the 8th of august – 35° C in the middle of holiday season. Salon deRadika was hosted by our partners from Slow Food Bulgaria.The event was held in the „art foundation“, a cultural center, in the city center. Four chefs prepared finger food. They all had immigrant backgrounds, from Iraq, to Lebanon, Pakistan, and Korea. For them, food is a major tool of integration because it brings people together through talking about recipes, preparing meals, and eating together. Our 20 guests came from different organizations, such as a local refugee group, the Red Cross, UNHCR, and an organic farmer’s market. Also in attendance were a visual artist, a sociologist from the University of Sofia, and a journalist from the national public radio.

Radical opinions and hatred have become mainstream in Bulgaria. There is this example of a Bulgarian politician, who said “Roma are like animals and you should treat them like animals.” And there was no big outcry in the country. My explanation is: people become more and more indifferent towards politics.

Everybody is equal and so we should treat each other as equal people. I love Bulgarian people but sometimes I face racism. Even my 2-year old son was verbally attacked by neo-Nazis on the street. I don't feel hatred in those situations. I try to understand why people act like that. And my explanation is: They don't know any dark-skinned people. And you cannot understand what you don't know.

Radicalism in whatever direction needs soil for the seed to grow. And if the soil is poisoned, the radical opinion will be poisoned too. If the soil is healthy, the seed can grow a positive radicalism with constructive ideas. We therefore need to make space for healthy soil.

We are radical because we are considered silly people for selling our little products in an industrialized food system. We have faced many skeptical reactions and have had to fight governmental restrictions of where and how we can sell our products. But now we are doing quite ok.

Gentleman from a refugee organization:

People become radical when they are neglected and excluded from society, like in the film of Jeremie Maradas-Nado. When a human being experiences a lack of personal attention and love, they look for someone who is paying attention and so they easily fall for anyone who sees them as an individual.

Lady from a food organization:

It is remarkable how educated and calm the protagonist from the extreme right spoke. That way they are not so easily revealed as Nazis with an inhuman appearance. On the other hand, some of her statements are part of mainstream opinion in Bulgaria right now.

We also have positive radicals in Bulgaria. Especially with environmental issues. Remember the gold mine? They even managed to prevent it.

The question, what can be done against hatred, indifference, and negative radicalism could not be answered by the guests, but it was an very inspiring and enriching discussion. 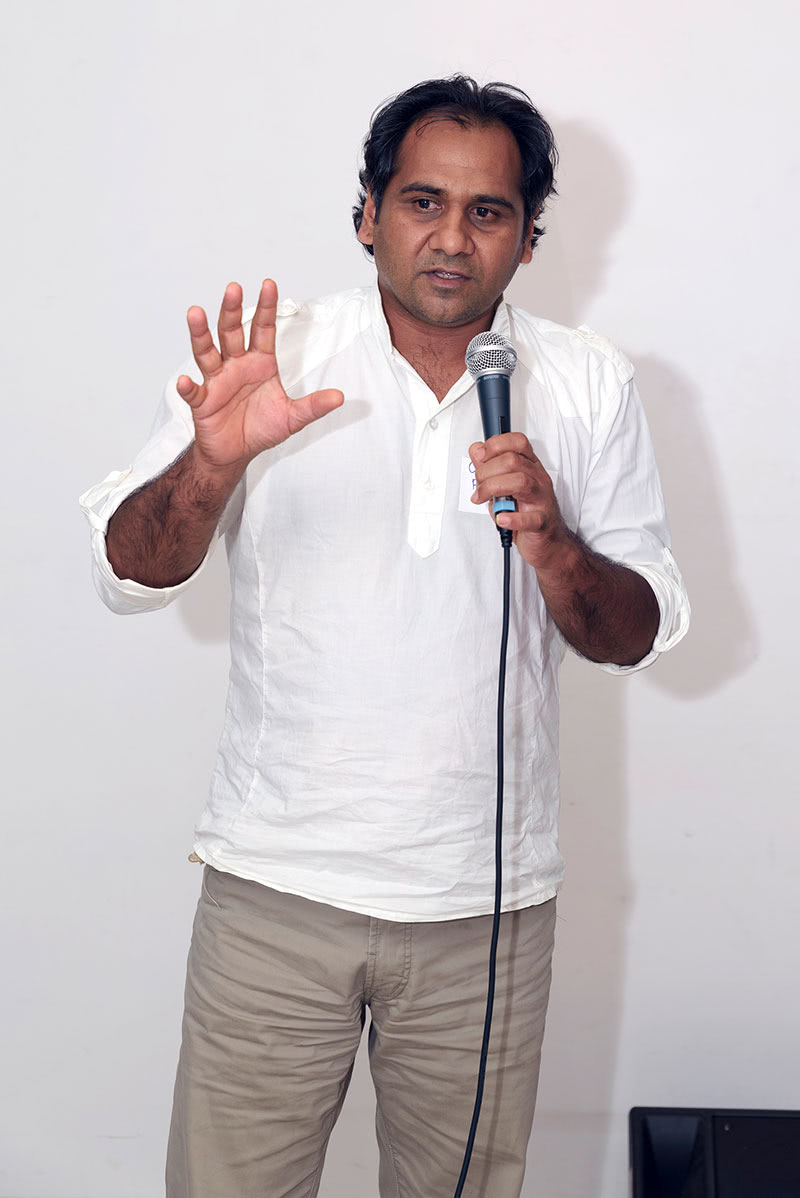 Saif Ur Rehman is a Pakistani cook, cricket player and coach as well as standup comedian who has been living in Bulgaria for more than 20 years. He is the owner of the Pakistani Punjabi Food restaurant which also hosts theater plays and other cultural events. 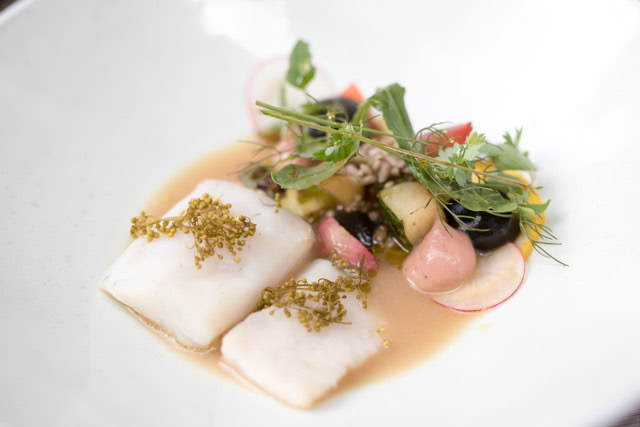 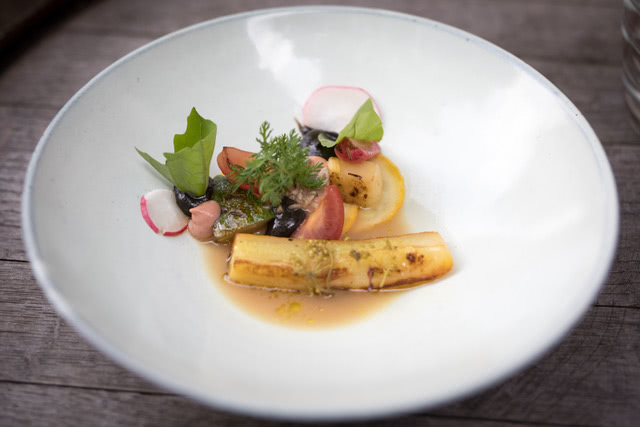 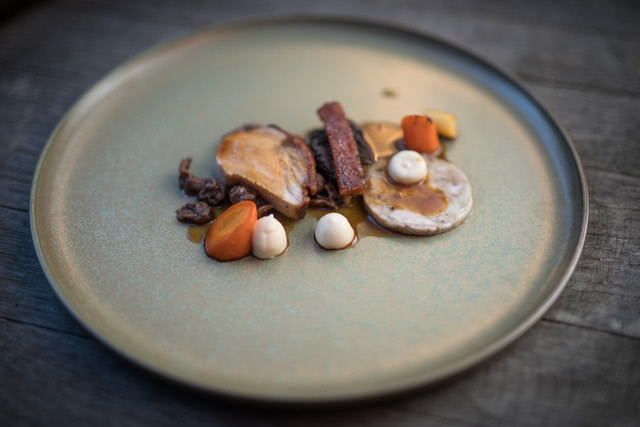 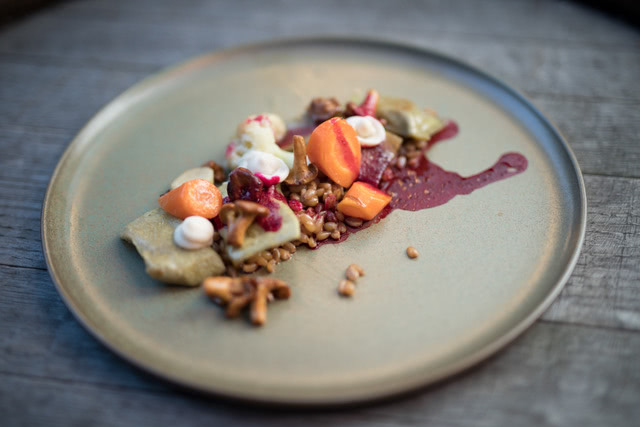 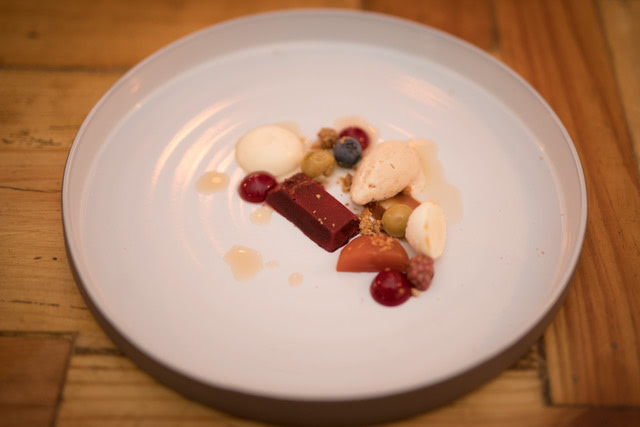 On our way to the first salon #deradika. In a few hours it will take place in Berlin in the restaurant #herzundniere. Their respect for the well-being of animals mandates that the chefs use the entire animal – from head to tail – in concocting their dishes. We are looking forward to the discussion!